Emergence isn’t about collecting a bunch of fine people and letting them do what they want with no structure of any kind. In fact, emergence needs structure–just not the same kind of structure traditional organizations use.

Functionally speaking, the traditional top-down structure is a method of augmenting one person’s ideas with the minds and bodies of others–like a human Voltron. 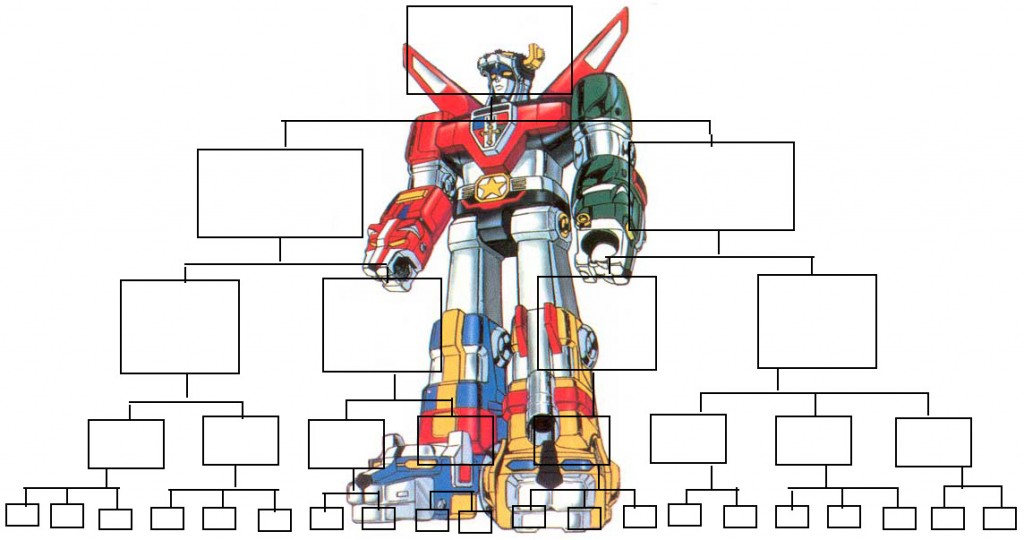 This is familiar to our way of thinking–a reflection of Industrial Age ideals of order, rationality, and efficiency. But Voltron is ultimately a machine, and as we enter the Second Machine Age, organizational structures that mimic machines are going to fall by the wayside: they are less efficient than actual machines, and less adaptive (in an evolutionary sense) than organic communities.

Consider the example of Microsoft’s .NET versus the open-source Ruby On Rails: the closed, controlled, heavily planned product has consistently lost market share for years, while the decentralized, agile developer community has turned out a consistently more popular and more useful product. In terms of external incentives and long-term planning, Microsoft should have the better product. Instead, Microsoft is planning to make .NET open-source because of the spectacular failure to keep up. The organic community has unequivocally trumped the traditional model.

Let’s take another stab at that organization chart. Take the person at the top and place her instead in the middle. Connect her to all her sources of information, her co-workers, the people who report to her, the people to whom she reports. Do the same for each of those people to whom she’s connected, outward until everyone in the organization is accounted for, and connect each of them with their points of contact to the outside world. What you have now much more resembles a neural network: 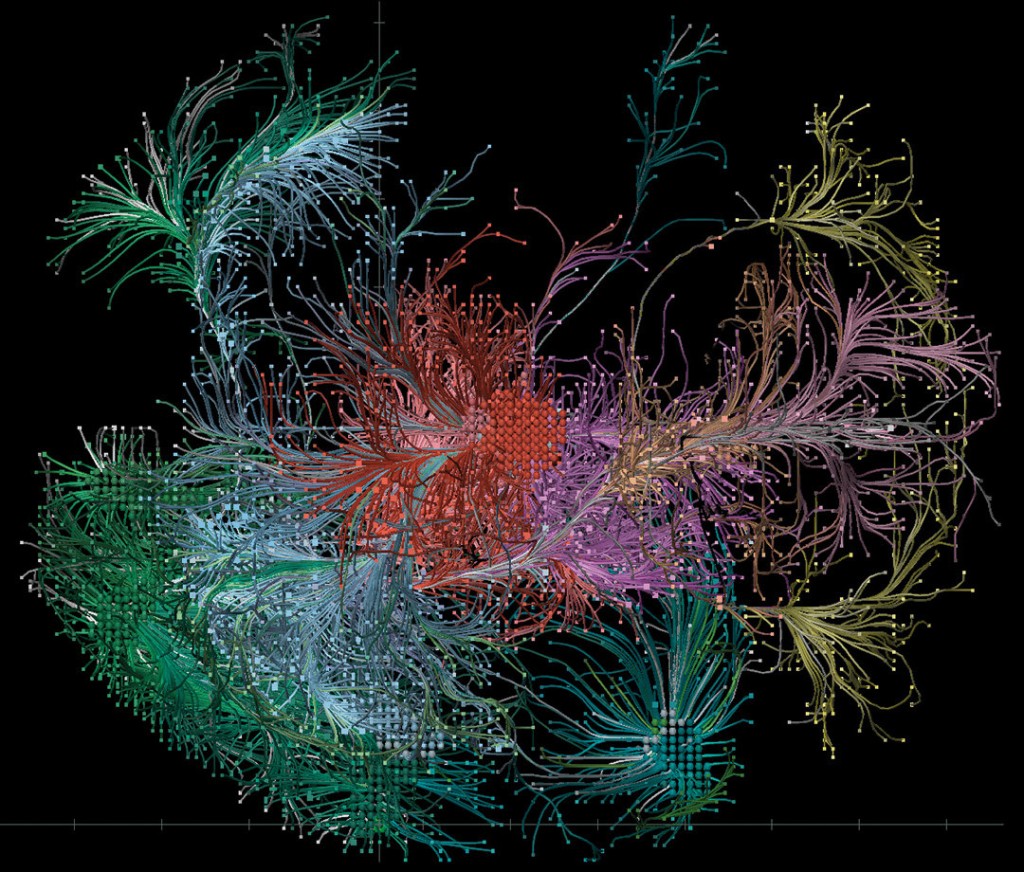 This isn’t an aspirational image, it’s a reflection of reality–a reality that the former image attempts to control and confine into a linear hierarchy. For comparison, here is a map of Twitter employees using the platform: 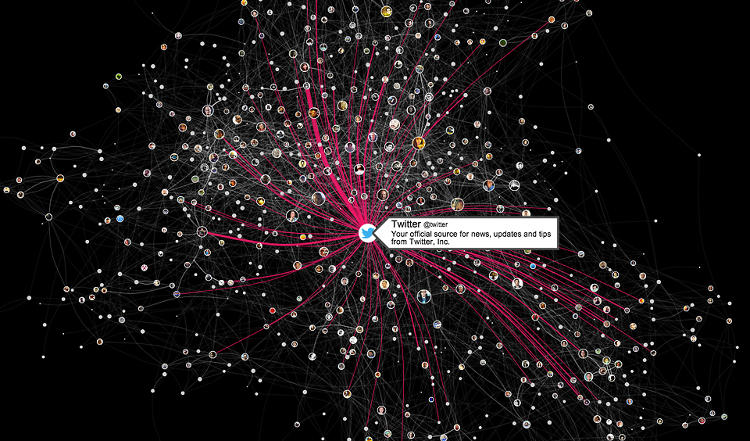 Seeing an organization in this way–as it organizes itself, and not as the linear design into which we try to squeeze it–reminds us of the first principle of emergent structure: the number and quality of connections improves emergent behavior.

This isn’t a call to increase the number of networking events at your business. Human beings will create connections on their own if given the right environment.

Consider Google’s practice of mixing functional groups on the floor. While this would be anathema to a linear hierarchy–I would have to walk to another part of the building to talk to a co-worker–at Google, the people around you may become your co-workers. Some businesses have replicated the design without taking into account the hierarchy and culture, resulting in marginal improvements at best, and often employee frustration. (Even at Google the practice is not without its drawbacks, but it is an intentional culture play.)

A social contract is, at its most basic, an agreement held in common between any number of people, either written or implied. Top-down structures choose policies and impose them. Leaders of adaptive organizations make a case that a policy is in the best interest of the organization, and modify it based on the needs and applicability to a particular population. We all agree that we need to follow a certain regulation or we will face prosecution, therefore we promise to follow that regulation and hold one another to it.

In this way, instead of imposing a rule that employees follow like the speed limit (seven miles per hour over isn’t really speeding, you know), employees are accountable to one another for their actions. We all know we have made the promise with one another; when I violate the promise, I have broken my promise with everyone in the organization.

Finally, in addition to good connections and social contracts, emergent structure requires process. This may seem to contradict what I’ve said so far, except that human processes are approximate–they are always applied using judgment and a “feel” for the particular situation.

Human process is an interesting phenomenon. Machine processes can be made to take variables into account, but machines don’t make judgments. And machines don’t vary processes in ways they haven’t been explicitly programmed to learn, i.e., they don’t introduce personal experience or personal interpretation. Emergent behavior in an organization depends upon human experience and variability, working against an established process, to produce unexpected outcomes. Only processes that are documented and followed can be improved. Everything else is folk knowledge, which is improved by rare individuals and passed piecemeal to others.

This kind of adherence to and improvement of process depends wholly upon social contracts and quality connections: I must know that I am not documenting my changes to the process on behalf of some uncaring management four levels above me, I’m keeping rigid documentation on behalf of people like myself in the organization who are doing their best to cover for one another and keep things moving.

This is why I encourage you to abolish the idea that there is a “top” or “bottom” to your organization. The goal is to have a structure where everyone finds the most appropriate place for as long as that place is appropriate, not a structure where everyone struggles to climb as high as they can. In order for this to work, we also need to rethink the role of leadership in such an organization–because it is still critically important–and what that leadership is attempting to do.

I’m eager to get your thoughts on all this. Did any of this sound like an organization where you’ve worked, either under the traditional model or under a more adaptive approach? Have you seen leaders embrace the “neural network” of organization and truly try to engage all their members in uniquely meaningful ways?

Culture is an emergent phenomenon. It exists between the people who make up that particular culture, and evolves based on their interactions–the mythology, folk knowledge, and traditional practices they create and pass between themselves. If you hire based on skill alone, your internal culture will look pretty much like the rest of your industry, because it will be populated with the same kinds of people.

Unlike the Industrial Age, hiring today isn’t picking up a part to put into an already-designed machine to make the machine run. Hiring into an emergent environment only happens when the candidate fits both the current culture and the future culture. Emergent strategy depends on the people within the organization working with and off of one another to yield unplanned results.

Here are a few tweaks to your hiring practices that may yield better results:

Filling your organization with effective people who fit with the people around them and are excited about a common vision is the basis of any good culture, not just in an adaptive organization. But because of the importance of emergence in adaptive organizations, getting the mix of people right for your culture is a crucial requirement for success.

EDIT: Reader Brian Gorman offers two additional points to consider: “Having spent more than four decades living in the world of organizational change, I would add two more to his list. 1. Hire for the culture that you want, not the culture that you have. 2. Hire for resilience; you need people who can learn new skills, and shift their mindsets, as your organization continues to change.” I would add a caveat to the first that anyone you hire needs to be able to work in the culture you have today, or she’ll be out the door as soon as she can–which makes finding adaptable people all the more important during a period of change.

Which of these points do you find is most important or illuminating? Are there any important points about hiring for culture that I’ve missed? Do you disagree with my points? I look forward to discussing it with you in the comments.

In my last post I mentioned emergent behavior is a strength of adaptive organizations.

A definition of emergent behavior: A behavior is emergent if it’s something the collective does without any individual intentionally aiming to  it belongs to a collective but not to the individual components that make up the collective. It’s sometimes used interchangeably (even though it isn’t strictly interchangeable) with “self-organizing.” The movement of a flock of birds, for example, isn’t led or organized, but nonetheless ends up creating a beautiful, organized pattern–so much so that scientists long hypothesized that there was some sort of organization or leadership.

On the surface level, it’s easy for leaders to get excited about emergent behavior. It’s engaging, it’s innovative, and because of its connection to artificial intelligence, it sounds futuristic. But as soon as you start to dive into the details of emergence, it starts to get scary very quickly.

Emergence not only unplanned but unplannable. It doesn’t obey a strategy or market tactics. We’re able to tell the stories of the individual parts of a system, and we’re able to tell the story of the system as a whole, but the individual story and the story of the whole are not clearly and causally related. In other words, it’s not possible to control emergent processes to create a specific desired outcome–at least not without some kind of mind control.

To most business leaders, this makes emergence a non-starter, or at the very least makes it something they would limit to a dark corner of the dreaded Innovation Department. Our objective is to contain what we can’t control and subdue it with everything we can control. Giving up control is the exact opposite of what I try to do every day.

The good news is that, although I’ve written quite a few words already about emergent behavior, I haven’t yet mentioned what emerges.

I want to emphasize that emergence doesn’t mean surrendering your organization to chaos and anarchy. I will delve further into the subject, but for now just imagine that your organization is your back yard. At present, at its best, your backyard is neatly mowed, has some nice lawn furniture and a couple of lawn games. I’m not suggesting you should let your lawn be reclaimed by nature–covered in scraggly bushes and weeds–but that your lawn could be a Japanese garden, a beautifully manicured work of nature. Without the self-directed growth of the plants, it wouldn’t be possible, but likewise it wouldn’t have form or meaning without the care given to cultivating and pruning those plants.

I’d like to take this opportunity to do a check-in with you. What excites you about emergence? What concerns you? I have several posts in the works, but I’m interested in where you want this to go next. Let’s have a conversation in the comments.